The River Wye flows through Herefordshire where bird numbers – and their waste – surged in the year after the supermarket signed a deal with a local processor.

The River Wye flows through Herefordshire where bird numbers – and their waste – surged in the year after the supermarket signed a deal with a local processor.

As the River Wye flows through mid-Wales to the Severn estuary, it passes through the so-called chicken capital of the UK, where an estimated 20 million birds are farmed in the river’s catchment.

The role of human sewage and wastewater in polluting our rivers has been strongly criticised, but chicken manure from a soaring number of intensive poultry farms plays a huge role too.

Excrement from the birds is rich in phosphates and is spread on the land as a fertiliser to encourage crop growth, but the land can no longer absorb the amount of manure being spread along the Wye, and the runoff is turning the river into what campaigners describe as “pea soup”.

Waste from chickens has been identified by scientists at Lancaster University as one of the largest sources of phosphorus pollution in the Wye catchment, which causes the “pea soup” algal blooms.

More than a thousand poultry farms across England are licensed to hold 40,000 birds or more | Source: Environment Agency

The hotspot for chicken farming in the Wye area is Herefordshire, where the numbers of birds began soaring in the early 1990s. Then, in 2013, a deal to supply extra chicken to Tesco, the UK’s biggest supermarket, was given to Cargill, which owns a major processing plant in the county.

Around the same time, Cargill announced a £35m expansion of its Hereford plant to boost the number of chickens it could process.

Water quality monitoring equipment installed by Natural Resources Wales, a government body, near Glasbury-on-Wye, Herefordshire Water quality monitoring equipment near Glasbury-on-Wye in Herefordshire. Photograph: Alexander Turner/The Guardian The two events appeared to spark an increase in new chicken sheds being built in the area, according to a Guardian analysis of publicly available data.

There were 22 applications to build intensive poultry units (IPUs) in Herefordshire in 2014 (14 of which were for broiler chickens), leading to an additional 1.4 million birds a year on farms in the county.

Between 2013 and 2017, the number of birds in the county increased by more than one-third, from 13 to 18 million, as the scale of what had already been a hotspot for intensive chicken farming grew even larger.

“You can absolutely say that it [the big increase in chicken numbers in 2014] will have had an impact,” said Paul Withers, professor of catchment biogeochemistry at Lancaster University.

Withers told MPs last year that the phosphorus surplus in the Wye catchment was nearly 60% greater than the national average because of the large amounts of livestock manure being produced locally.

“The large increase in livestock numbers has created a long-term problem by adding significantly extra phosphorus loading on to the land area in the Wye catchment. This remains in the soil, increasing the risk of phosphorus transfer to water every time rainfall runoff is generated. Soil phosphorus levels change only slowly, so reducing the impact on river water quality will take decades to correct.”

Avara Foods, jointly owned by Cargill, is now the third-largest poultry producer in Britain, accounting for the vast majority of the 18 million chickens in Herefordshire.

“The significant expansion [in the area from 2013 onwards] was because of Cargill needing to fulfil larger orders,” said one planning consultant who put through a significant number of the new shed applications.

“I think the problems we’ve got in this part of the world were all created by putting far too many in at the same time,” said a land agent who dealt with applications to build new sheds, in an interview with PhD researcher Alison Caffyn. “What they agreed to do for Tesco created a bit of a PR disaster.”

A spokesperson for Avara Foods said: “It would be wrong to suggest that any one customer would influence business change to the degree that is being speculated.”

Helen Hamilton, a planning and environmental consultant who has worked with campaign groups opposing IPUs for a decade, said Herefordshire council had failed to grasp the long-term impact of Cargill’s growth and took no account of the cumulative impact of so many birds, or their waste, in one concentrated area.

“The knock-on effect in terms of building more poultry units should have been obvious,” said Hamilton. “Their lack of any strategic policy means this expansion was certainly a planning policy failure.”

In May, the UK government rejected a call from MPs and environmental groups for a ban on new and expanding IPUs in the Wye area.

Meanwhile, expansion in the River Wye catchment continues, with an IPU housing an extra 90,000 birds approved by Powys county council in March.

The numbers of chickens and livestock in the Wye area today have left the river in a “critical state”, according to Tim Bailey, a pollution expert at the Environment Agency.

Herefordshire councillor Elissa Swinglehurst, chair of the River Wye Nutrient Management Board, likened the situation to “trying to empty a bath with the taps running”.

“Unless, and until, we reduce the input of phosphate into the catchment, we are going to continue to build the residual loading of the soil. At the moment, the taps are still on full,” she said.

A spokesperson for Avara Foods said: “We fully recognise the issues facing the River Wye and are committed to playing our part, in keeping with our broader mission to provide healthy, affordable food for millions of families, while consistently improving animal welfare and sustainability. 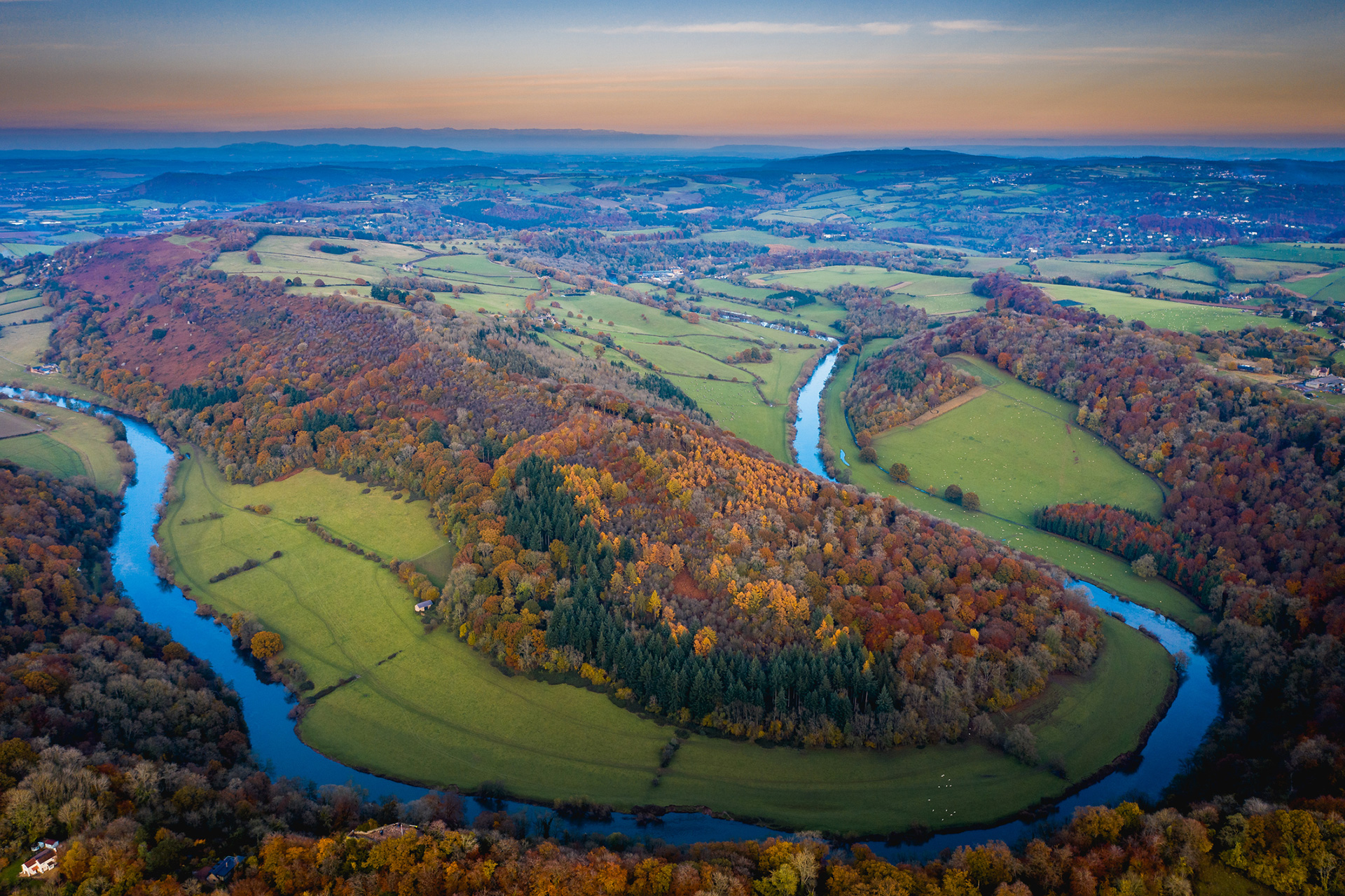 View from Symonds Yat of the Wye Valley. An estimated 20 million birds are farmed in the River Wye’s catchment. | Source: Getty Images

“It is worth repeating that Avara Foods does not spread litter on land, nor is there a direct runoff from our farms, which are all indoor facilities, into the catchment. Every farm in our supply chain has a manure management plan and we expect full compliance with all legislation regarding litter management.

“We have been supporting projects that would have the capacity to divert all litter from our supply chain away from land and potentially create a circular economy for poultry litter.”

Herefordshire council said that, in the past, it had not been able to properly assess the impact of new developments on the River Wye.

“Remarkably, up until now the tools necessary to properly assess cumulative impact simply have not existed. Herefordshire council is the first planning authority in the world, and certainly the first in the UK, to develop such phosphate calculation tools within a planning policy framework,” said Liz Harvey, the council cabinet member for finance, corporate services and planning.

The planning tool would enable the council to ensure all future farm developments would be “nutrient neutral in their impact”, she added.

A spokesperson for Tesco said it was “committed to playing our part in ensuring the protection of the River Wye, alongside other actors across the food industry”.

The company said it also funded the work of the Wye and Usk Foundation. “They work directly with our suppliers on implementing nature-based solutions, including tree planting, as well as supporting farmers to test soils and implement on-farm best practice that all help reduce pollution in the River Wye.”

Additional research for this article was undertaken by Dr Alison Caffyn, formerly a researcher at Cardiff University. The Journalismfund.eu helped to facilitate this story.

Next chapter: ‘It’s like a giant sewage plant’: how a toxic red alert hit the German pig belt ››