25% of the land suitable for fertilization in Aragón already contain more nitrogen than allowed, according to an analysis based on public data from 1.8 million plots carried out for the first time for this investigation. Transporting slurry more than 5 km from the farm is not profitable.

25% of the land suitable for fertilization in Aragón already contain more nitrogen than allowed, according to an analysis based on public data from 1.8 million plots carried out for the first time for this investigation. Transporting slurry more than 5 km from the farm is not profitable.

Since over a decade ago, when the number of intensive farms was much lower than it is today, Aragón has been familiar with the problems that slurry management entails. In 2008 in Tauste and other areas of the autonomous community, the government implemented a pilot project with European funding to use slurry as an agricultural fertilizer. This project discovered the great potential of slurry as an organic fertilizer compared to mineral fertilizers. But the idea, like everything else, had limits.

According to data from the Government of Aragón’s General Directorate for Rural Development, pig farms within the autonomous community produced 11.7 million cubic meters of slurry in 2019. That’s the equivalent of 3,500 Olympic swimming pools. There is simply not enough land on which to pour so much slurry.

An analysis carried out for the first time for this investigation revealed that around 400,000 hectares support more nitrogen than allowed, according to data from all the enclosures suitable for fertilization of the Aragonese Institute of Environmental Management (INAGA), referring to more than 1.8 million parcels. It represents 25% of the area declared suitable for fertilization and coincides with areas that have a high concentration of pigs.

5 km, the border of profitability

Pig farming facilities spread much of the slurry they generate on land close to the farms because, the industry explains, any movement of slurry beyond 5 kilometers is no longer profitable due the sheer transportation costs. It is increasingly difficult to maintain profitability without saturating the soil’s capacity to absorb the slurry when more and more increasingly large farms are built, the number of annual cycles increase and, consequently, slurry generation grows exponentially. This research has captured, by means of drone flights, images of land next to pig farms flooded with fresh slurry, as well as the tanker trucks that spread the slurry on the land. This has not happened only once, but on several trips to the area. Pig farmers consulted explain that the slurry must be covered with earth in the days following their application to the soil to avoid oxidation and gas emissions. 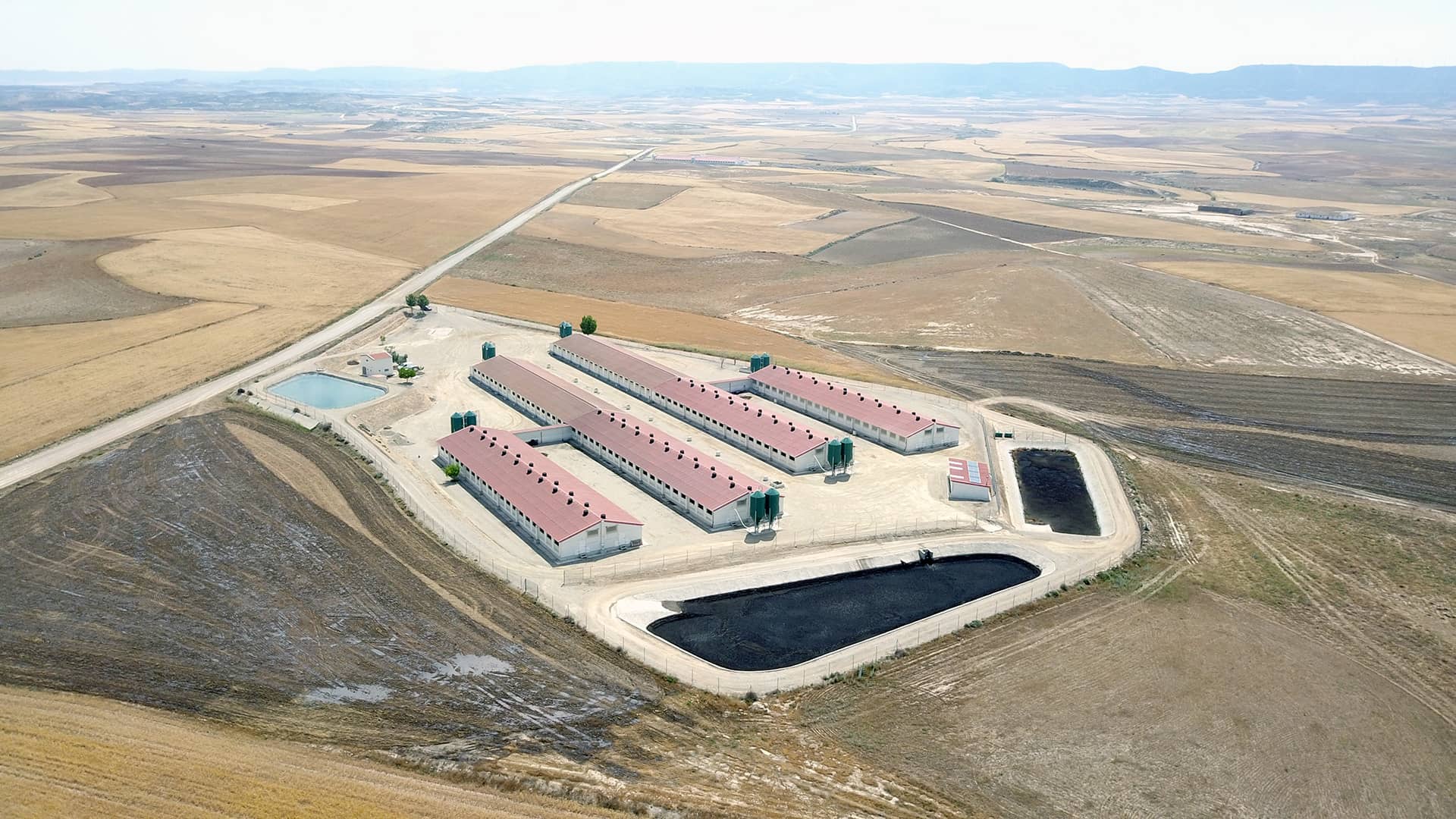 Photo taken from an industrial pig farm in Tauste (Zaragoza) on June 2, 2022 where it can be seen that a few hours before the land next to the farm had been fertilized with manure. | Source: DATADISTA

Under the slurry layer, on the soil surface and under it, there is the major risk of polluting groundwater, the reservoir considered by European regulations to be essential for human supply when the climatic emergency worsens and droughts are prolonged. Thirty percent of Aragón is already in areas vulnerable to nitrate pollution, which are under special protection and strict legal regulations. It has nonetheless not been possible to prevent the proliferation and concentration of intensive livestock farming in these areas. Within them, thousands of plots have fertilizer levels that triple the recommended standards.

All the fertilization enclosures that support more nitrogen than allowed together with the situation of all the industrial pig farms in Aragón.
All industrial pig farms and zones vulnerable to nitrates in Aragon.
All the water affected by nitrates, according to Royal Decree 47/2022 and the areas vulnerable to nitrates in Aragon


Animal excrement stored in outdoor ponds at these facilities not only poses a risk to water resources, but also generates pollutants and greenhouse gases such as methane, ammonia and nitrous oxide. The ammonia present in the slurry is oxidized when it is applied to the soil and is transformed into nitrate. Aragón is responsible for 14% of the total methane emissions by large-scale pig farms in Spain.

The poor implementation of the Nitrates Directive in Spain led the European Commission to take the country to the European Court of Justice at the end of 2021. Spain has also failed to comply with its ammonia emissions limit for a decade. In 2020, it emitted 483,000 tons into the atmosphere, although the limit set by the European directive was set at 467,000 tons. All the large-scale pig farms in Spain put together generate 8.16% of total national ammonia emissions.

In January 2022, the Spanish government approved new water protection regulations regarding nitrate pollution from agricultural sources. These regulations replace the previous version, from 1996. After 26 years of regulations, the new text acknowledges that "despite the efforts made, the results obtained through the aforementioned standards have not achieved the intended purposes."

Until 2020, not even a third of the largest farms were inspected yearly, the annual average being at 275 inspections between 2017 and 2020. In 2021, 608 inspections were performed. The figures show that authorities are aware of the magnitude of the problem, but few cases are investigated, penalties and fines remain infrequent and only occur in very flagrant cases.

Out of all inspections conducted between January 2017 and June 2022, 26 enforcement processes have been opened against companies in or related to the pork sector, companies producing pork meat byproducts, feed companies and slaughterhouses. Eight of them are serious cases. The fine for a serious violation is 20,001 euros. Such a fine has been imposed on one of the macro-farms owned by Piensos Costa S.A., of the Costa Group. This was a farm directly owned by the corporation, not a contracting farm under the “integration” model. Facilities owned by this corporation have been inspected 11 times in the last five years, and two of those inspections resulted in a fine.

Photo of the large slurry pond at the Piensos Costa S.A. pig farm. located in Peñalba (Huesca). Photograph included in the inspection report carried out in May 2019. According to the inspector, the waterproofing layer is not visible in the image and no fencing has been carried out | Source: Government of Aragon

This investigation has had access to all enforcement proceedings opened within the last five years, including images from an inspection visit that show the state of the slurry pond at the Piensos Costa facility in the pig production area located in Peñalba (Huesca province).

Next chapter: Do not drink that water ››